It’s half past four on Christmas Eve, 1976. Lori Bloom, aged three and three-quarters, is leaving a busy department store with her mother when the tannoy announces that a child in reception is lost and crying for her parents.

The impact on Lori is immediate. ‘Calippa Cumberland’, the mysterious girl with blonde hair and a curious name, becomes her imaginary friend and a constant presence into adulthood. For as one Christmas follows another, Lori finds herself confronting painful questions and in need of a companion in whom she can confide.

But will there ever be someone Lori can completely trust? And will Christmas Eve ever be about finding and being found, rather than losing and being lost?

I've read and reviewed Chick's books before and really enjoyed them so I was looking forward to reading his latest, Talking to Calippa Cumberland, and I wasn't disappointed.

Chick is never afraid to address tough issues in his books. In this case the challenges started from the very beginning, as this book is written in the first person from a female point of view. Kudos must be given to his daughters who apparently answered some of the kinds of questions not often asked of daughters by their Dads, although they warned him they would only answer them once! Chick's research approach proved effective, because Lori is both believable and relatable as a character at the various points in her life.

I enjoyed her connection with her invisible friend Calippa, and the journalling/letters worked really well. I love letters in stories! Chick has done well to make Lori the child as engaging as Lori the adult, and the views of the world through her eyes are beautifully told.  I also love the description of 17 Morley Close, when Lori walks on the wall and talks to Calippa, for example. There's lots of detail which helps make the story feel immersive, but the detail doesn't overtake the storytelling. There's humour here and there too, such as Lori's wry observation on Christmas Eve 1996 that 'There are even some compliments on my cooking which, since we're only on the first glass of wine, actually seem to me to be genuine.'

The story manages to weave the traditional, in the form of the Christmas Eve carol services, and the secular, partly in the form of Lori's very sceptical view of religion, which stems in no small part from the tough situations she had to face from a young age. There are some gems of peripheral characters too, of whom my favourite is definitely Madge, whose friendship with Lori starts as an annual meeting on the church steps on Christmas Eve, but who will be influential in no small way in Lori's life.

Setting the story on a series of Christmas Eves is a different approach which works well. There are some twists in Lori's story, some of which were WAY bigger than expected, and some very sad, but overall this is a novel of hope. Of faith rebuilding trust. Of overcoming loss and letting go of the fears it brings. Plus a large helping of the importance of being aware that what may seem to be someone's perfect life can easily be anything but away from the public's eye.

And the end is awesome (but no spoilers here! 😉).

An engrossing read, recommended as a fresh approach to the 'Christmas Novel/Novella' genre.

Note: For more conservative readers, be aware that the book does include some sexual content.

Chick Yuill is a speaker, writer and broadcaster with a passion to bring matters of faith out of the narrow confines of a religious ghetto and into the wider arena of public life and discourse. He writes fiction because of his lifelong love of words and out of his growing conviction that nothing reaches truth or touches people’s hearts better than a well-told story.

Talking to Calippa Cumberland is his sixth novel published with Instant Apostle.

He has been married to Margaret for more than 50 years and has her name tattooed on his arm for the sheer joy of it. 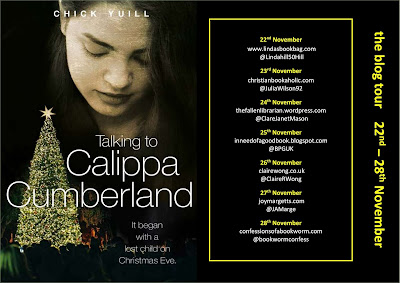 Note: for transparency, I was sent an advance copy of this book, but I was not required to write any specific or favourable review. All views herein are my own.

Anne Rogers
Passionate about reading, writing, and photography. I'm an inexpert church bell ringer, am aiming to walk 1000 miles this year, and I own a VW camper van called Tonks!